SciCommSci Club: Facilitating dialogue between research and practice in India

You are here: Home1 / Newsroom2 / Industry news3 / SciCommSci Club: Facilitating dialogue between research and practice in...

What does it take to run a SciCommSci Club? Siddharth Kankaria shares his experiences and lessons learned.

Careers in science communication are often filled with unstructured learning and reflections. As someone who’s been a part of the science communication ecosystems of both India and the United Kingdom, I’ve learnt a lot from my experiences in both these countries, but also reflected on how the field differs in these places.

Further, science engagement in India has several unique challenges, and translating research findings from the Global North to contexts within the Global South are not without their own set of caveats.

In a small step towards addressing these goals, in August 2019 I decided to launch a science communication discussion forum in Bengaluru (India) called the SciCommSci Club: Engaging with the Science of Science Communication.

Mandates of the SciCommSci Club

The Club aims to raise awareness about multidisciplinary science communication research and how it can be used to inform science engagement practice, especially in the Indian context.

It brings together science communication enthusiasts from a variety of backgrounds, experiences, and interests to collectively discuss the ‘Science of Science Communication’ (or #SciCommSci).

The Club also serves as a space for networking, dialogue, and mentorship that facilitates an interdisciplinary exchange of ideas and life experiences between all participants.

Activities at the SciCommSci Club

Over the past year, the Club has conducted a series of featured SciCommSci talks in Bengaluru, in research topics concerning science communication models, science policy, science art, public engagement, and science pedagogy.

Apart from our featured talks, the SciCommSci Club also organises ‘SciComm Unplugged’ sessions, which provide participants with personalised feedback for improving their science communication practice. These sessions have proved to be a great way of promoting evidence-based practice, in addition to our SciCommSci talks and workshops.

Focussing on the Indian Context

A recurring theme within our Club discussions is that science engagement initiatives in India operate within a complex interplay of socio-cultural identities and contexts, ranging from language, religion, ethnicity, culture, literacy levels, and even science capital.

Not surprisingly, such an incredible diversity of life experiences poses unique challenges for engaging publics with science or for designing participatory science initiatives.

For instance, consider a target audience that resides in a remote Indian village, is literate in a regional Indian language only, and has limited access to educational resources. The small number of public-funded science communication initiatives available to them are usually ‘need-based’ or utilitarian in nature, in that they focus on filling ‘deficits’ in their knowledge about health, sanitation, agriculture, and energy-related issues. Such audiences could additionally benefit from initiatives that are ‘curiosity-based’ or socio-cultural in nature, which focus on exposing people to the joys of learning about the natural world around them, and promote scientific thinking.

Navigation of such intersectional contexts can greatly benefit from multilingual practitioners with a good understanding of scientific concepts, command over the nuances of the regional language, as well as lived experiences within local contexts.

In such a scenario, practitioners can greatly benefit from relevant training and capacity building programmes designed on the basis of multidisciplinary science communication research within local contexts. Such evidence-based training programmes can help practitioners become more receptive to intersectional identities and contexts, to flexibly employ an assortment of approaches, and to creatively adapt their practice to localised contexts.

Navigating these long-term goals requires several short-term steps, such as raising awareness about science communication research, ensuring sustained engagement with relevant stakeholders, and establishing a synergistic dialogue between the next generation of science communication practitioners and researchers. This is exactly where a discussion forum like the SciCommSci Club can help.

In a small step towards facilitating these goals, the SciCommSci Club, in partnership with Science Policy Forum, organised a series of thematic policy deliberation sessions in July 2020 titled Towards a Policy Framework for Indian SciComm. These sessions specifically deliberated on four themes for improving science communication in the Indian context:

2.    Developing ecosystems for training and capacity-building

These sessions brought together 70+ science communication practitioners, scientists, social scientists, and professionals from across India to engage in open and constructive dialogue. Their discussions were later translated into a concise set of Policy Recommendations for Strengthening Indian SciComm, and forwarded to multiple STEM policymaking bodies under the Government of India.

We are thrilled that, in just a year, the SciCommSci Club has not only organised numerous events and contributed to policymaking processes but also helped build an inclusive and nurturing community of science communication enthusiasts across India.

Although the COVID-19 pandemic forced us into a brief hiatus earlier this year, we managed to launch a second season of SciCommSci talks and feedback sessions in August 2020. With many more virtual events planned for next few months, we look forward to engaging not only with Indian audiences, but also international ones, especially from the Global South.

We hope to continue bridging the gap between research and practice by nurturing this dynamic community of science communication enthusiasts, and keep facilitating discussions on #SciCommSci both locally and globally!

Siddharth Kankaria is a science communication practitioner from India, keenly interested in facilitating dialogues between science communication research and practice. He currently works as a Science Communication & Outreach Manager at the National Centre for Biological Sciences, Bengaluru, and can be reached on social media at @SiddhrthKnkaria.

Select Readings for Engaging with SciCommSci: 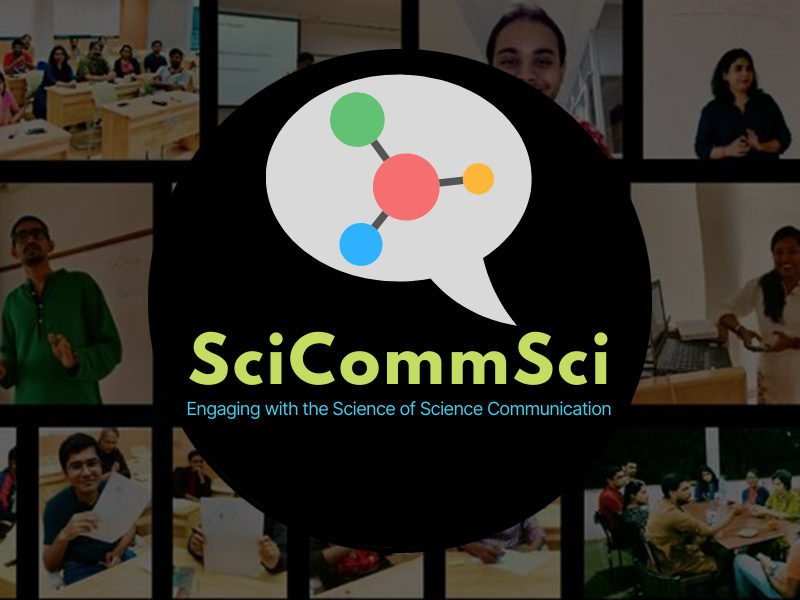 Behind the scenes of The Scicommer