“Our globe is small and imperfectly formed”

You are here: Home1 / Newsroom2 / Conferences & events3 / “Our globe is small and imperfectly formed”

In his president’s address to the PCST2020+1 conference, Brian Trench asked what it means to be global or take a global view. He urged greater openness in science communication to linguistic diversity.

Brian Trench, PCST President, opened PCST 2020+1 with an address to attendees discussing what it means to be a global network in a diverse and unequal world. The text is published below.

Welcome to a conference that we have been calling PCST2020+1. This unusual label will forever recall the unique circumstances in which this conference has been prepared and now takes place.

We have been presenting this conference as ‘virtual and global’. We describe PCST as the global network for science communication. What we mean is that we are simultaneously present and accessible in all continents and all major regions of the world.

But, beyond that, what does it mean to be global? We have in the past year and a half become acutely aware of living on a shared globe. Eighteen months after the first rumours of an unknown virus in Wuhan in China, public health systems in every country are working flat-out to contain and, hopefully, crush a pandemic that has killed over three million people.

In previous decades we had other insights into our global context. When humans went into space fifty years ago they got to see earth as a pale blue dot. As multinational corporations and financial institutions created and conquered new markets around the world they drove a process known as globalisation. As awareness of the climate crisis grew in recent decades, so too did the awareness that this required a global response.

These examples immediately draw attention to the fact that global processes may be inequitable, certainly not the same for all countries, or in all countries. Indeed, the way we distinguish between Global North and Global South underlines this, and the coronavirus pandemic has further accentuated it. Despite the remarkable international cooperation of scientists in sharing knowledge of the new virus and its variants, and in developing vaccines, competition is intense for supplies of vaccines, and international coordination of public health responses has been, at best, challenging.

The global citizens who run the World Health Organisation are feeling this keenly. According to Dr Mike Ryan, an Irish surgeon who leads the WHO’s Health Emergencies Programme, “Covid has laid bare and exploited fundamental inequities in access to public healthcare and the reality that healthcare can be used to empower or curtail human, civil and political rights”.

The imprint of imperialism, colonisation and racism on our world remains strong. The more aware we become of the global dimensions of our individual and social existence the more we come to recognise that our globe is small and imperfectly formed.

Science is perhaps one the first truly global endeavours, in the sense that it is practised in very much the same ways in all countries. The remarkable scientific cooperation we have seen in the past year expresses this. But communication is culturally differentiated, not least by language, so what does it mean to take a global view, or a global perspective, in science communication?

To be a global network or to adopt a global perspective means cataloguing and comparing, but also much more: it means developing and constantly refining a coordinated view that encompasses convergences and divergences around the world. That is a continuing task to which our conferences and the publications that grew from them can and do contribute.

There are examples in science communication of formats and even products being exported from metropolitan centres in a process that resembles commercial globalisation. Equally, there are powerful examples of bottom-up sharing of ideas and experiences that allow adaptation and that represent a more equitable global spread. The global spread of, for example, science centres, science communication training and science cafés shows evidence of both trends.

Internationalisation, or global spread, raises questions of language. In science, as in many other spheres, these questions have been answered by English becoming completely dominant. In my lifetime, chemistry students in English-language universities used to learn German, as an important language of publication in the discipline. But publication in English has become the leading criterion of scientific achievement around the globe, and learning English is the passport to international mobility.

In many instances, the English in scientific publications is weak but the technical detail can be understood even if the commentary is not linguistically precise. However, in science communication we should be highly sensitive to the loss of nuance in meaning. That loss is unavoidable with the widespread use of a language that is a second or third language for so many in our global community.

It is a remarkable geopolitical phenomenon for English to have become so dominant. Colonisation, world wars, and, more recently, globalisation and the internet have all helped drive its spread. 400 million people are native speakers of English, but 1 billion have it as their second language. English is even shared as a common language between peoples whose own languages are not far apart from each other.

These circumstances have implications for diversity and authenticity in science communication, which is culturally conditioned and linguistically differentiated. The first three PCST conferences took place in French- and Spanish-speaking locations but English was a ‘natural’ common language for the emerging network.

But a pragmatic choice like this can have distorting implications. So, ideas born out of experiences in English-speaking countries travel much more easily than those from, say, Spanish-, Mandarin- or Swahili-speaking countries. Public engagement and STEM are just two strong examples of this and it is striking to read and hear these terms being used in their English form in non-English contexts. The use of these terms reflects particular conditions and historical circumstances in Britain and the United States, and the connotations may be lost to those who adopt them into other languages.

Native speakers of English should be more aware of the additional effort others have to make to join the international conversations. We should allow space and time for everybody to understand and to be understood as best they can. We should be very careful not to assume any privileged status from the accident of being born into the shared language of our international community. 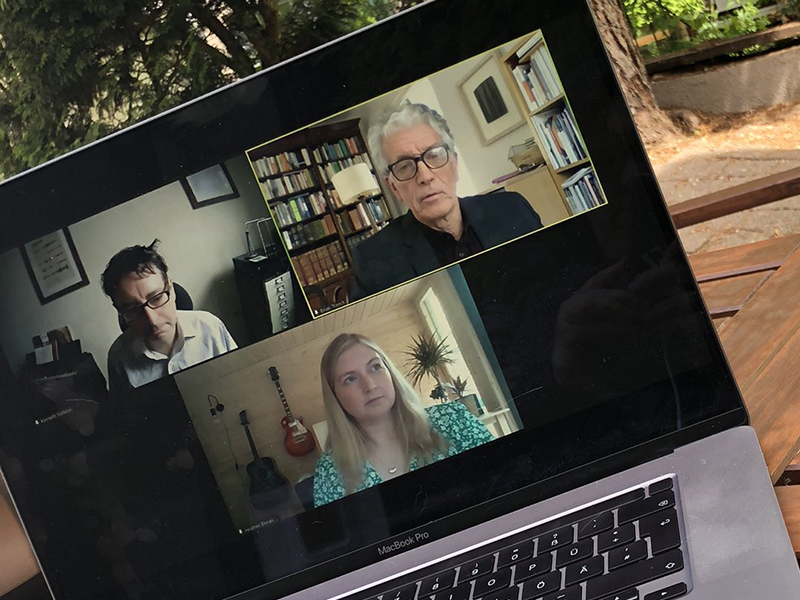 A snapshot from PCST 2020+1, showing Brian Trench and two of the conference organising committee, Heather Doran and Ken Skeldon.