The Road to Aberdeen

You are here: Home1 / Newsroom2 / Conferences & events3 / The Road to Aberdeen

Kenneth Skeldon – joint bid lead for PSCT 2020 and Head of Public Engagement at the Wellcome Genome Campus – writes about the journey that has brought PCST to Aberdeen in 2020.

I’d love to say the journey to bring the PCST 2020 conference to Aberdeen was a long term, well thought out and carefully executed plan! But the reality is much more organic, sparked by a mix of common interests, converging networks, supportive colleagues – and a touch of serendipity.

To Brazil and Back

Although the PCST network was known to me in science engagement circles for some time – mainly via colleagues in Australia – the road to Aberdeen really started with PCST’s 13thouting in Salvador, Brazil. In Aberdeen around that time, we were half-way through a project called Catalyst – exploring university culture change towards public engagement, supported by the UK Research Councils. When Rick Holliman, lead for a sister Catalyst at the Open University suggested sharing our experiences in Salvador, we enthusiastically accepted! And so in May 2014, my Catalyst partner Lucy Leiper and I headed to Brazil, also joining colleagues Helen Featherstone and Ed Stevens from the University of Bath Catalyst, to share and discuss our experience of embedding public engagement in higher education institutional strategy.

Salvador was my first PCST conference, and I was struck by many things that were different about it compared to the other science engagement gatherings I’d been to in the UK and Europe. Firstly, the mix of people was different, and in particular the combination of research and practitioner communities bringing complementary perspectives to conference sessions and themes. There was a real sense of value on what people had researched, experimented with, and evaluated.  Secondly, the global nature of the PCST network was striking, with an international delegate list bringing a host of social and cultural contexts. It was inclusive too – backed up by progressive measures many meetings lack – such as attendance bursaries for students and delegates from low and middle income countries.  Finally, PCST’s focus on early career researchers, including a dedicated pre-conference programme, really stood out for us. In Aberdeen at that time, Lucy and I led the University’s researcher development and public engagement units respectively, and we were testing approaches spanning these two areas, robustly connecting skills and career development with public engagement experiences and evaluation.

Reflecting on Salvador, I couldn’t help feel the distinctiveness of the PCST gathering could offer something different within the UK science engagement scene. I was thinking particularly of the large and active science communication and practitioner community that I’d been active in myself over many years.  PCST had never been to the UK in its 22 year history, and so I began to explore the feasibility of hosting an Aberdeen bid with the University of Aberdeen and city’s conference teams. But I also knew PCST chose its venues carefully, looking at the local context of science and technology and its relationship with people.

Fortunately, Aberdeen had a really interesting story to tell around socio-economic change. The city’s research and innovation pedigree benefits from two universities, both with strong community connections. The region’s industries are diverse, from agriculture to tourism, financial to technology. But it is Aberdeen’s status as the energy capital of Europe, propelled by the ever-changing North Sea oil and gas industry, which really influences everything, resulting in such a unique backdrop of cultural and economic change, and which would help inspire PCST 2020’s themes around time, technology and transformation. Aberdeen also has a long and progressive history of science communication. At the time of mounting the bid, I had the privilege of chairing the Board of Directors at the city’s science centre, one of the first in the UK, and which after 30 years was itself entering a period of transformative change led by centre manager Liz Hodge and her team. The city’s science festival also has a long history, having launched in 1989 soon after Edinburgh.  And the University of Aberdeen’s own annual May Festival was bringing researchers together with the public, and offered a unique point in the year to coincide PCST with, offering a unique public science programme. Also, my team had successfully bid to host the 2012 British Science Festival in Aberdeen, which energised more people than ever across the region to engage with science and technology.

Despite the strong story we had, the idea of bringing PCST and its global following to the North East Coast of Scotland still seemed a bit of a stretch. Questions over whether people would travel, or whether we had the right infrastructure were niggling doubts in our minds.  I’d already explored informally the idea of PCST in Aberdeen with Brian Trench and we were pretty much set on our ambition. However, to gain some reassurance, we reached out to colleagues and friends across the globe who we knew through various projects – asking mainly one question – would you come?  Maybe this is where the mountains, lochs, beaches, castles and whisky trails come into play!  But we were really buoyed by the positivity from people, such as Marie Joubert, GultekinCakmakci, Shadrack Mkansi, Padraig Murphy, Anne Dijkstra, Lloyd Davis, Sue Stocklmayer, Alex Gerber – to name but a few. All offered advice and encouragement to formally express our interest. To add further value to our bid, another of our UK Catalyst colleagues – Sandy Oliver from UCL – responded enthusiastically to connect a special edition of ‘Research for All’ – the new public engagement with research journal – to the 2020 conference.

So in 2015, we registered our interest to bring PCST to Aberdeen in 2020 spearheaded by the University’s academic lead for engagement at the time – Dame Anne Glover. Our bid drew a lot from the above story – including a suitably attractive social dimension!  We also committed up front to offering travel bursaries based on need.  We were delighted to make the shortlist for the bid presentations – scheduled to take place at PCST 2016 in Istanbul.  In April 2016, myself and co-chair of the local organising committee Heather Doran headed off to Turkey for a fabulous Istanbul conference, especially given the troubled backdrop in the region at the time.  Together with Rick, we presented our bid to the PCST committee in a slightly surreal setting where an almost immediate power cut killed all the lights and our projector failed. Thankfully, we had paper versions and continued ‘old-school’.

Needless to say, we were all delighted when we discovered we were the preferred bid for 2020 – and returned to Scotland where the real work began!  Although there’s been a few changes along the way, and I left Aberdeen myself in 2017, it’s great to see the plans for PCST 2020 develop. Heather, Nikki, Steve, Barbara, Rick, Melanie, Alex, Marcel, Neil – there’s a lot of people working hard behind the scenes to make PCST 2020 the absolute best it can be. But equally, it wouldn’t have happened at all were it not for the people and projects along the way – coming together and wanting all to strive for better – especially the Catalyst crew – Lucy, Rick, Heather, Sandy and others.  Hopefully when PCST 2020 finally arrives on 26-28 May, and following the fabulous New Zealand conference, there will be lots of time for reunions, forming new friends and hatching new plans. 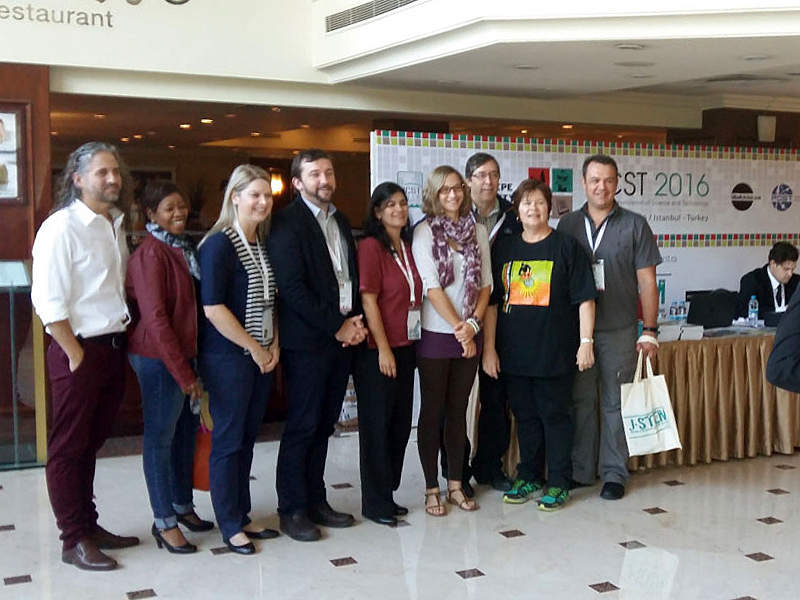 The people that have brought PCST 2020 to Aberdeen.