Professional territorial tensions at the 2019 World Conference of Science Journalists (or, perhaps, communicators?)

You are here: Home1 / Newsroom2 / Conferences & events3 / Professional territorial tensions at the 2019 World Conference of Science...

Every two years science journalists from around the world gather in a different city to reflect on the status and challenges of their profession. So, when other travel plans took me to Europe towards the end of June 2019, I seized the opportunity to attend the 11th World Conference of Science Journalists (WCSJ) in Lausanne, Switzerland from 1 – 5 July 2019.

The conference offered an exciting line-up of leading editors, award winning journalists, top scientists and influential policy makers, as well as an enticing opportunity for networking and nurturing media contacts. Also, given the close proximity of science journalism and science communication research and practice, I reckoned this would be an excellent opportunity to find out more about trending issues in science journalism. As it turned out, many other science communication practitioners and researchers had the same idea.

In more than one session, questions were asked about the proportion of conference delegates who were ‘real’ journalists. An impromptu show of hands revealed that so-called ‘science communicators’ and ‘institutional press officers’ made up a significant portion. Perhaps even more telling, many of the press officers were former journalists who migrated to institutional jobs after losing previous jobs in the mainstream media. While some insisted that one had to choose between working as a journalist and as a communicator, many freelancers admitted to having a foot in both camps.

It is even possible that, amongst the 1250 delegates who showed up for WCSJ 2019, science communicators outnumbered full-time science journalists. This may explain the territorial tensions that surfaced in some discussions, both in the meeting and on social media platforms.

“This is a world conference of science journalists and therefore journalists are first and foremost who we serve,” said Mohammed Yahia, President of the World Federation of Science Journalists for the two years leading up to the conference, when I interviewed him on the last day of the event. “We have a strong working relationship with communicators and press officers, but it is important to realise and acknowledge that we have different aims.

“We welcome press officers at this conference, because it is very important that they should know the issues that journalists care about and understand why we are passionate about keeping science accountable.

“We are critical of science because we care about science,” Yahia explained. “I believe that science journalists’ scrutiny of science actually improves the process of science over time.”

The conference kicked off with the usual messages from prominent policymakers and scientists. One after the other they spoke about the crucial role of science journalism, calling on journalists to help defend science against perceived attacks and to help rebuild public trust in science. Conference sponsors even talked about the importance of promoting the champions of science and celebrating scientists like athletes and rock stars. But many veteran science journalists were adamant about drawing a clear line between their profession and science communication. “Science journalism has nothing to do with promoting science,” said Deborah Blum, publisher of Undark. A flurry of tweets with the #WCSJ2019 hashtag echoed these sentiments. I don’t believe in science communication, Niall Firth (@niallfirth), technology editor at MIT Review tweeted. The goal of science journalists is not to communicate science or educate the public, but to ask (sometimes hard) questions and get to the bottom of the stories we’re after, science writer Giorgia Guglielmi (@GiorgiaWithAnI) agreed. Science journalism is not the promotion of science but a mechanism to hold science accountable #wcsj2019, Brian Lin (@brianlin), editorial direct at EurekAlert!, echoed.

When science journalists took the floor the focus was on the importance of sustaining robust and independent science journalism, along with discussions around new business models that would allow quality science journalism to survive in the face of free online content and crumbling mass media infrastructures.

The collective uncertainty about the future of science journalism was excellently captured in a cartoon by Reto Schneider (@retouschneider) shared with the #WCSJ2019 hashtag. In the cartoon, a group of insects look at some science journalists approaching and ask: “Science journalists? What do they want here?” Then one replies: “They are like us: indispensable, but their habitats are shrinking.”

“Science press officers – purveyors of truth or masters of spin?” This was the title of one session (out of 63) that focused on the role of press officers in the process of science becoming news. Hype and spin occurs at every step of the way, Canadian radio journalist Ira Basen showed. Scientists, press officers, and journalists all contribute to overly optimistic science reporting and share a responsibility to do more to ensure open, ethical and transparent communication of science. In the ensuing debate, a few brave science communicators pointed out that some science journalists have become little more than conduits for press releases, and that so-called science communicators were sometimes doing a better job of living up to the ideals of science journalism. Some science journalists acknowledged the importance of good relationships with institutional communicators for getting access to good stories and experts.

On Twitter, an interesting response from science writer Paul Thacker (@thackerpd) caught my eye. Science communication is ingrained in science journalism, he tweeted, because most of the reporters are science fans, like most music reporters are fans.

Also on Twitter, American journalist and professor at New York University (NYU) Charles Seife (@cgseife), pointed out that the scicomm vs. journalism issue has been a source of ongoing tension for years. I think that everyone on this thread is aware of this, and, in different ways, are working toward the same ends, he added. Science journalist and former NYU academic Michael Balter (@mbalter) agreed about the need to distinguish between science communication and science journalism. #SciComm is not the same as science #journalism and the two should not be confused, he tweeted. They may overlap in some cases but the distinction is still critical. #SciComm is PR for science.

As someone decidedly more at home in science communication territory, I thought that some of the conference sessions could be described as ‘science communication’ rather than ‘science journalism’. Examples included the use of comics and manga to share complex scientific concepts, as well as the sharing of science via improvisation theatre and infographics.

The 2021 WCSJ, to be hosted by the Colombian Science Journalists Association, will take place in Medellín. It is likely to have a very different flavour compared to the alpine horns, yodelling and fondue that characterised the social side of the Swiss event. But, no doubt, some of the same issues and debates will surface again. 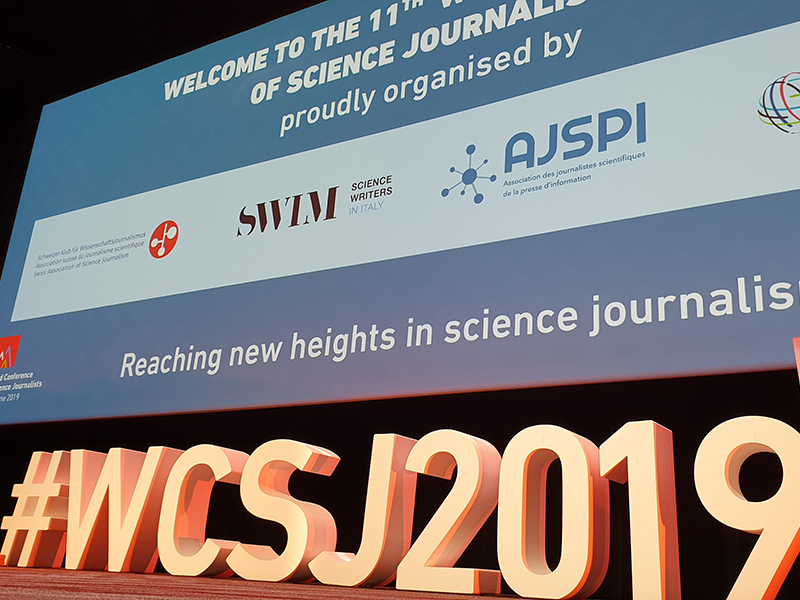 The main stage at the 11th World Conference of Science Journalists in Lausanne (photo by Marina Joubert).