You are here: Home1 / Newsroom2 / Conferences & events3 / Brainstorming towards PCST 2023

“We live in a complex society. COVID-19 made us realise just how complex science and society interfaces are with many role players, influencers, messages, messengers, uncertainties, and more,” said Bernard Schiele when he reflected on a recent two-day planning event for the 2023 PCST conference.

“Our complex society is driven by science; it impacts every aspect of our lives. On the one hand, science is everywhere, and on the other, science does not have the authority it once owned. Science is a driving force, but science no longer has the final say,” Schiele reminded us. “Today, science has to compete with other views, voices and agendas and science is challenged to interact, engage, and compete with many other systems of knowledge. This became clear during the pandemic. Therefore, as science communicators, we have to reinvent ourselves all the time.”

On 30th and 31st of May 2022, 23 members of the PCST scientific committee and local organising committee met in Rotterdam to lay the groundwork for the upcoming PCST Conference in April 2023. The event took place at “De Doelen”, the venue where the conference itself will also be hosted. The two-day planning event focused on conversations relevant to the scientific content of the 2023 conference, as well as getting to know the conference facilities.

PCST president Jenni Metcalfe got participants into a conference planning mode by reflecting on the history of the PCST Network and its past meetings. “Since attending the first PCST conference in Montreal in 1994, the network has changed my life and career through rich connections and productive collaborations,” she said. She spoke about the crucial “boundary-spanning” role of science communicators working at and across borders in the science ecosystem. Their roles include persuasion, knowledge transfer and relationship-building, as well as building bridges between all the actors and publics in public science communication.

Toss Gascoigne led a conversation about how COVID-19 and climate change are changing the field of science communication. Panel members were Hans Peter Peters, Cees Leeuwis, Alice Fleerackers and Cho Sook-kyoung. Peters spoke about the overlap, but also the clear differences, between public communication of science and risk communication.

In her talk, Cho suggested five priorities for future science communication based on lessons learned during the pandemic; namely: (1) restore public trust in science; (2) protect scientists who go public; (3) enhance data literacy; (4) invest in science media centres; and (5) focus on specific topics of high importance, such as energy and health.

Some of the discussion focused on the question of deficit-style science communication in contrast to public dialogue. “There are knowledge deficits, but you can only address these if you have a trust relationship with the public,” Leeuwis said. Peters agreed that the differences in knowledge between different groups in society are functional, rather than structural. Therefore, scientist can and should provide information when needed, but not with a hierarchical attitude of superiority. Peters commented on the challenge of capacity when it comes to dialogue: “If you have to provide information to millions of people, dialogue faces capacity barriers,” he explained. “Effective dialogue happens in small groups and therefore dialogue will always be selective.”

Leeuwis commented on the need for scientists to think about engagement with society in a new way by embedding these activities in their research careers. He added that universities should facilitate scientists’ engagement work, support best practices and study these interactions.

Host of the 2023 conference Maarten van der Sanden led the second conversation that focused on how to create common ground in science communication – the overall theme of the 2023 conference. Melanie Smallman, Ynte Hoekstra and Mohamed Elsonbaty participated in the panel discussion about how we can create common ground in science communication research and practice, celebrate the diversity in our field and foster connections between researchers and practitioners.

Offering a view from Egypt, Elsonbaty reminded us that science communication infrastructure may require a level of democracy that is not always possible in every cultural context. “We can’t just apply a one-size-fits-all approach to fostering science engagement worldwide,” he added. “Even when we come from completely different cultural contexts, I hope we can come together in pursuit of shared belief in the value of public communication of science; this is what creating common ground means to me”.

Smallman commented on the need for well-paid, stable careers for science communicators, “Capacity, knowledge, skills are all well and good,” she said, “but stable funding and infrastructure to bridge practice and research are essential in the long term”.

As the chair of the PCST 2023 program committee, Marina Joubert led a practical planning session for April 2023, focussed on inviting top keynote speakers from different parts of the world, and finalising the official call for proposals.

The event included a mini-workshop about encouraging equity, diversity and inclusion (EDI) in the PCST organisation and conferences. This reflects the commitment of the PCST Network to EDI principles, and follows on an earlier survey and report about making future conferences as inclusive and diverse as possible. A talk by Katherine Legun ensured that everyone was on the same page regarding EDI concepts and terminology, and understood the existing inequities in academic environments. All participants had an opportunity to contribute ideas about how to prioritise EDI as a subject for future meetings, lectures, workshops, online activities and webinars.

All participants committed to bringing the PCST 2023 conference to life over the coming months and are looking forward to welcoming delegates to Rotterdam in April 2023!

By Kelly Rademakers and Marina Joubert

Highlights from the Rotterdam planning meeting – looking forward to PCST 2023 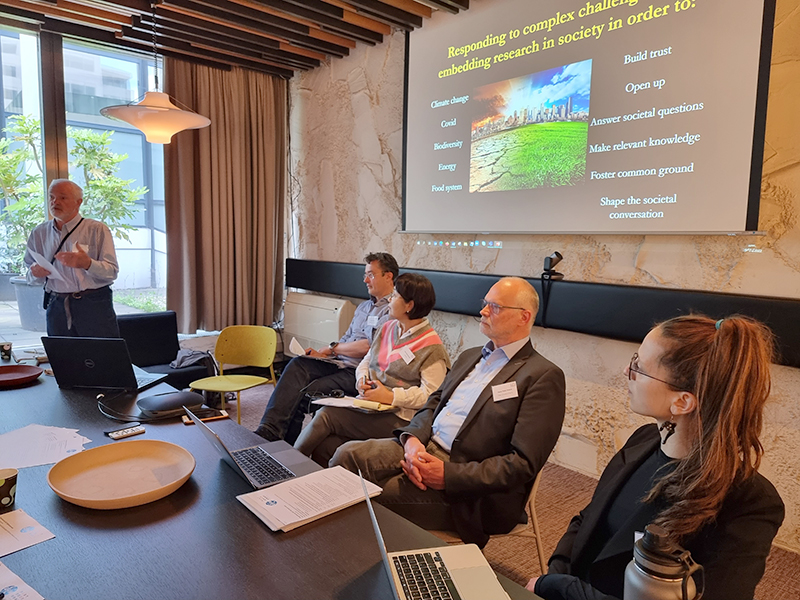 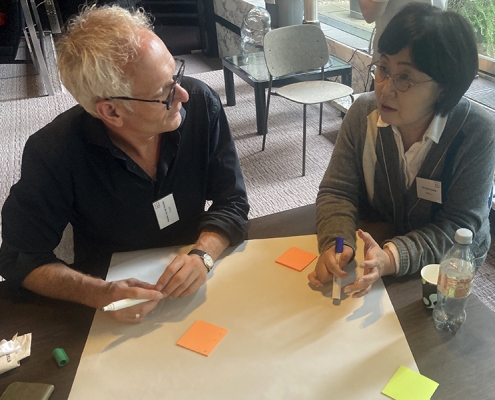 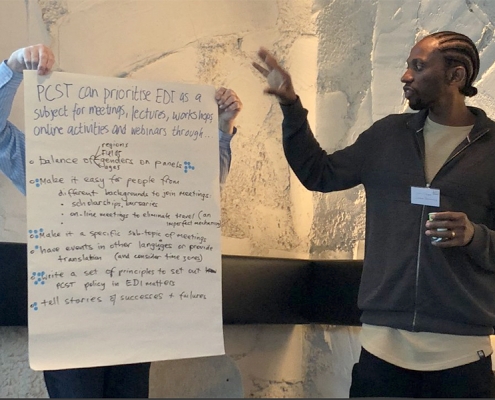